"Jonesboro realized the necessity of owning the water and light plant in conjunction with the new sewer system."

Mr. Christy played an integral part in the creation of City Water and Light. He devoted countless hours working hand in hand with commissioners and others in the community to bring about the reality of a public utility system in Jonesboro. Mr. Christy remained as manager of the plant until his retirement in 1930.

"Mr. Christy Played An Integral Part In The Creation Of City Water And Light."

In 1930, Lloyd M. Rebsamen was named to fill the post after Mr. Christy's retirement. Mr. Rebsamen held a mechanical engineering degree and started to work on construction crews for the new power plant. During his fourteen years with the utility, the power plant was expanded and a new powerhouse was constructed at Main St. and Johnson Ave. to house the three boilers and two turbines that provided a combined capacity of 4,500 kilowatts.

In 1944, Lloyd Rebsamen retired to enter private business and Neal Thayer, also an engineer, was hired as manager. Through Mr. Thayer's leadership, the utility expanded with the addition of water treatment stations, power plant expansions, and electric substation construction. In 1960, a new wastewater treatment plant was constructed in Jonesboro. 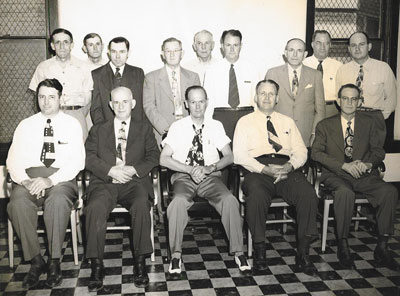 In 1961, CWL constructed a 161,000-volt line to Water Valley near Pocahontas, which is approximately 38 miles from Jonesboro, and made a tie to the Southwestern Power Administration system. This line was constructed at a cost of approximately one million dollars. The cost to purchase energy from Southwestern Power Administration was approximately the same cost to generate the electricity locally in Jonesboro. The foresight of the leadership benefited the rate payers with many millions of dollars of savings due to this connection and by purchasing the energy produced by the hydrogeneration.

"CWL constructed a 161,000-volt line to Water Valley near Pocahontas." 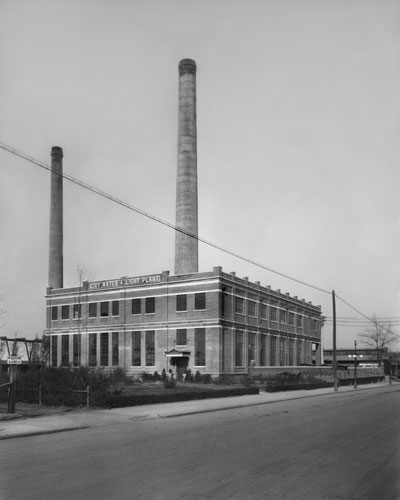 In 1970, at Mr. Thayer's retirement, Marion Ulmer who had served as assistant manager became the new manager of CWL. He served in the position of manager until 1984. During Mr. Ulmer's tenure as manager, CWL purchased five percent (5%) ownership in two coal fired electric generating plants located at White Bluff and Newark. This, along with expansions to the CWL system, led to CWL having the capacity to serve the needs of a growing city. The Race Street water treatment plant was installed in 1970.

"Marion Ulmer who had served as assistant manager became the new manager of CWL."

The management and board of directors of CWL sold 70 million dollars of bonds to purchase five percent (5%) in the Independence and White Bluff Coal Plants to be able to maintain competitive rates with this low cost coal generated energy.

In 1984 after Marion Ulmer's retirement, James A. Reed, an electrical engineer was promoted to Manager.

"A new wastewater treatment plant was placed in service in the fall of 1987."

The CWL Board of Directors authorized the construction of a new wastewater treatment plant in southeast Jonesboro that was funded entirely by reserve funds of CWL's and placed in service in the fall of 1987. The plant cost was approximately $7.2 million. This plant was increased by 50% in 1996 and a $7 million addition was completed in early 1998. This efficient and capable plant was instrumental in luring many food processors to Jonesboro. The new aesthetically pleasing Medallion water treatment station was constructed in 1987.

In 1989, a major annexation to Jonesboro occurred and approximately 3,600 new electric customers were acquired from Craighead Electric Cooperative Corporation.

"City Water and Light has added approximately 500 fire hydrants to the system in these new city areas to improve fire protection and to increase the flow capability."

On January 1, 1990, CWL and Valley View Water Association merged resources to better utilize the water systems located in the newly annexed area. Since the merging of the two systems, CWL has added approximately 500 fire hydrants to the system in these new city areas to improve fire protection and to increase the flow capability to these areas. In July of 1990, CWL purchased approximately 1,800 water customers from the Shady Park system located along the north half of Jonesboro. This again was done to allow for the area in the city to be scheduled for increased fire flow capabilities as the city grows.

Major additions and renovations to the general office building were completed in 1992.

Upon Jim Reed's retirement, Ronald L. Bowen also an engineer was promoted to Manager of CWL on December 31, 1995.

In 1996, CWL purchased an additional 84 MW of generating capacity in the Independence coal plant for 38 million dollars. Also this year, the Greensboro Water Tank with a 3 million gallon capacity was completed.

An addition to the East Side Waste Water Treatment Plant was completed in 1998, which increased treatment capacity by 50%.

On March 3, 2003, City Water and Light merged with Rural Water Service, Inc. (RWS). The merger allowed CWL to serve 3,800 RWS customers in the areas to the north, east and west of the Jonesboro city limits.

City Water and Light constructed the Neely Road Water Tank and Pump Station in 2007 at a cost of approximately $2.6 million. The tank has a storage capacity of 4.5 million gallons, and the pump station is capable of pumping over 4 million gallons per day (MGD). This facility greatly enhances water service and fire fighting capability in southwest Jonesboro, which has seen significant growth.

In July 2010, CWL laboratory personnel moved into a newly remodeled and expanded laboratory facility at the Eastside Wastewater Treatment Plant located at 5205 Ingels Road. The newly remodeled facility was expanded by approximately 1500 square feet. It houses separate laboratory areas for drinking water and wastewater testing. This facility has greatly enhanced CWL's ability to serve its customers and protect the environment.

In the new facility, laboratory personnel perform routine testing of CWL's drinking water to ensure that it meets Federal and State Drinking Water Regulations and is safe for human consumption. Also, laboratory personnel test wastewater treatment plant effluent to ensure that it meets National Pollutant Discharge Elimination System (NPDES) Permit Limits and will not harm the environment. CWL's Industrial Pretreatment Program is conducted out of this facility to protect the integrity of the Publically Owned Treatment Works and the environment.

The facility was remodeled with energy efficiency in mind. Various improvements were incorporated in this project to enhance energy and water conversation. This not only saves CWL's customers money, but protects the environment as well.

In 2012, CWL completed Phase I of the Commerce Water Treatment Plant at a total cost of approximately $6 million. The capacity of Phase I is about 6 million gallons per day (MGD), but the plant can be expanded in the future to a projected ultimate capacity of about 26 MGD.

Manager Ron Bowen retired June 30, 2014 after 45 years of service to CWL. Ron began his career at CWL in 1969 as an Engineering Aid, then promoted to Chief Engineer in 1975 where he remained until 1983 when he was promoted to Assistant Manager. On December 31, 1995, Ron Bowen become CWL's sixth manager. As Manager, Ron lead CWL in some major events such as:

City Water and Light constructed the Northeast Sewer Interceptor resulting in approximately 8,000 feet of gravity sewer line extending form the East Side Wastewater Treatment Plant northward to Krueger Drive and 13,000 feet of gravity sewer line extending from Kruger Drive to the Ellis Lane Lift Station just south of Prospect Road. This line adds over 16 MGD of collection system capacity, which will allow for future growth as well as take some load off of existing collection system infrastructure. The project was completed in September 2014.

City Water and Light’s Sanitary Sewer Evaluation Survey (SSES) Committee was formed in 2016 to provide oversight of CWL’s collection system basin studies and to further the development of the overall sewer system. To help develop the databases and data collection processes, the SSES Committee began working to implement a geographic information system (GIS) for the purpose of mapping the sanitary sewer collection system in 2019. CWL implemented this system in September 2020 and continues to upgrade the geodatabase design and development.

In October 2018, design and equipment acquisitions for the Hergett Substation upgrades began. This substation serves as a critical interconnection to Entergy and the bulk electric system. These upgrades included replacing breakers, transformers, and the instillation of a 200 MVA transformer. These improvements not only provide for growing electric loads, but also increase the reliability and flexibility of CWL’s current system. The project was completed in April 2020.

Upgrades to the East Side Wastewater Treatment Plant began in July 2018. While the plant has excess capacity from the biological treatment standpoint, these upgrades increase the hydraulic capabilities of the plant during extreme rain events. CWL also changed the wastewater treatment process to a UV Disinfection System. The UV Disinfection System upgrades were completed in April 2020. Hydraulic upgrades were completed in the third quarter of 2020.

City Water and Light is in the process of constructing a large-diameter gravity sewer line from just east of Midtown Jonesboro to a connection point on our Northeast Sewer Interceptor. This Midtown Sewer Interceptor line will be located approximately .5 miles east of the Jonesboro Municipal Airport and approximately .25 miles north of Highland Drive. It will provide additional wastewater conveyance capacity to parts of Midtown and Northeast Jonesboro. The project is expected to be completed mid-2021.

City Water and Light’s Main Lift Station was constructed in 1977 and pumps an average of over 2 MGD of raw wastewater to the West Side Wastewater Treatment Plant for treatment. CWL began construction in March 2020 to replace this lift station in order to increase its capacity and to address electrical and piping equipment that are well over 40 years old and approaching the end of their useful life. A new force main will also be constructed from the new lift station to the West Side Wastewater Treatment Plant, which will increase the facility’s capacity to approximately 15 MGD, as compared to the current facility’s 9 MGD. The expected completion date is the third quarter of 2021.

In April 2020, City Water and Light announced the development of a solar power system totaling 13.25MW. The system marks the first solar power project for CWL, affirming its commitment to bring clean, cost-effective solar power to its customers and community. Land was purchased in September 2020 which will serve as the site for the solar generating facility. The site is south of the Nestle Prepared Foods plant. Expected completion for this project is December 2021.

Outage Management System (OMS) went online in December 2020. CWL is using Milsoft Utility Solutions. The OMS will allow CWL to respond quicker and more efficiently to outages. It also gives the customer more information, such as an outage map, and allows more avenues of communication between CWL and customers with texting and IVR. This system was implemented in February 2021.

City Water and Light is one of a kind, in that, in Arkansas it is the only municipal improvement district set up which serves water, sewer and electricity to its citizens. The major advancements made by this utility can be contributed to conservative, but progressive leadership through its managers and the board of directors who have been willing to look to the future with the interests of Jonesboro in mind. This is evident by the existence of excess capacity in all three utilities and some of the lowest rates in the nation.

"City Water And Light's Goal Is To Continue To Meet The Needs Of A Growing Community And Provide Its Services At The Lowest Cost Consistent With Sound Business Practices."

CWL's goal is to continue to meet the needs of a growing community and provide its services at the lowest cost consistent with sound business practices. Currently we have approximately 39,000 electric customers, 37,700 water customers (including 6,000 rural), 25,300 sewer customers and a city population of almost 71,500. 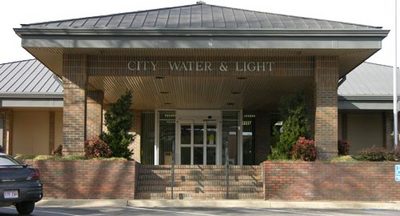